Play Therapy Interventions draft
The Feeling Word Game
Balloons of Anger
The Mad Game
Beat the Clock
Bubble Breaths
Worry Can
Party Hat on Monsters
Weights and Balloons
Power Animal
Puppet as Symbolic Client
Broadcast News
The Spy and the Sneak
Butterflies in Stomach
The Way I Want it to Be
Click! Emotions
Feelings Mish Mosh


Stages of Therapy and Development 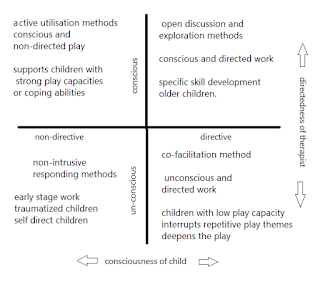 Conversely, the open discussion and exploration methods represent conscious and directed work and are argued to be suited to specific skill development and older children.

The co-facilitation method, reflecting unconscious and directed work, is recommended for children with low play capacity and to interrupt repetitive play themes and deepen the play. 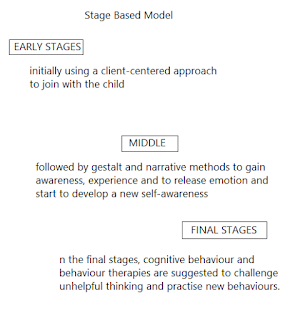 The stage-based model proposed by Geldard and Geldard (2008) offers another integrative approach to play therapy involving a different therapeutic focus at different therapy stages. This model suggests initially using a client-centered approach to join with the child, followed by gestalt and narrative methods to gain awareness, experience and to release emotion and start to develop a new self-awareness.

In the final stages, cognitive behaviour and behaviour therapies are suggested to challenge unhelpful thinking and practise new behaviours." https://www.psychology.org.au/inpsych/2015/june/short

Parenting Styles Continuum Developmental Affirations Family Rules Parent by Personality Types Challenging Temperaments Highly Sensitive Children Explosive Children Trauma and Parenting ADHD and Oppositional Defiant Disorder Sensory Integration Autism and Aspergers Early Childhood Teens Chores House Rules I have been a child and family therapist for over 20 years.  It didn't occur to me right off the bat how much choosing this profession would involve coaching parenting strategies.  So I've done my share of research over the years.  Here's what I found: THERE IS NO RIGHT WAY TO PARENT. Parenting is on a continuum .   This is best described by Jean Illsley Clarke (author of Self-Esteem a Family Affair), in Growing Up Again .  Parenting styles range from overly strict to overly permissive.  Probably moderation is the healthiest .  In the middle of the continuum, you should have a set of Non-Negotiable Rules and a set of Negotiable Rules. Rigidity
Read more