What is procrastination trying to tell you?

What Your Procrastination Is Telling You

"The key here is not to judge yourself when procrastination shows up, because it’s usually just trying to communicate something to you. So instead of feeling guilty or forcing your way through a task that feels impossibly exhausting and heavy, try asking yourself what your procrastination is trying to tell you. 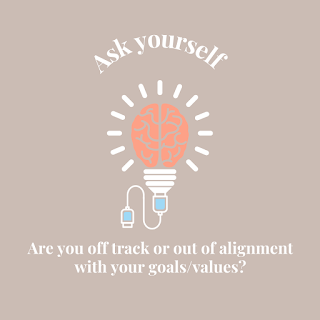 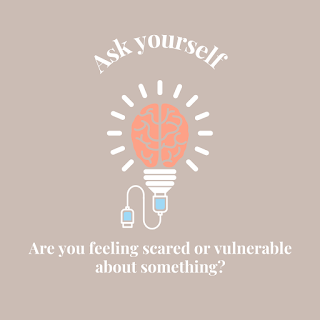 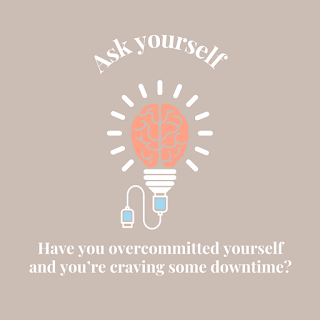 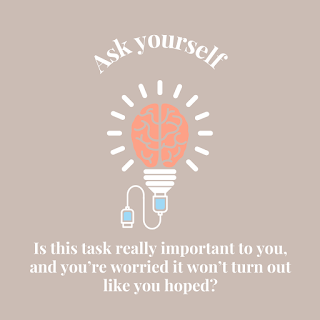 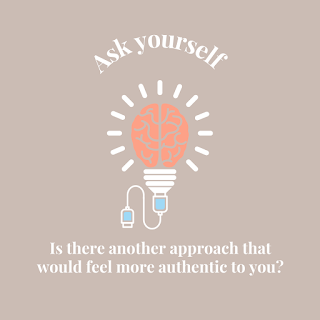 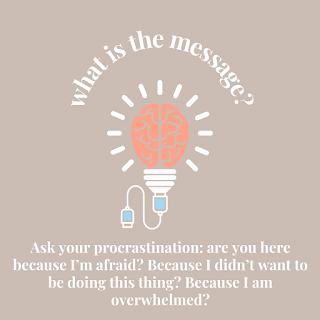 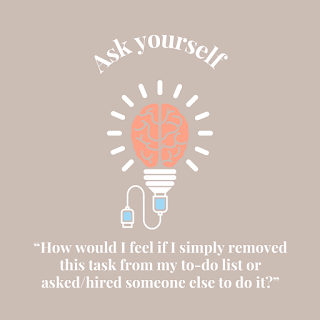 It might help to ask yourself this question: “How would I feel if I simply removed this task from my to-do list or asked/hired someone else to do it?” If you would feel completely relieved and free, then give yourself permission to let it go! But if your sense of relief is mixed with disappointment or discomfort, then your procrastination is likely coming from an inner fear. Being truthful about your fears is the first step to neutralizing them, so take this time to be honest with yourself. And if you’re still struggling with procrastination, consider working one-on-one with a coach to get to the root of your resistance."

Procrastination is a messenger

"Understand why you’re procrastinating and then work towards that. 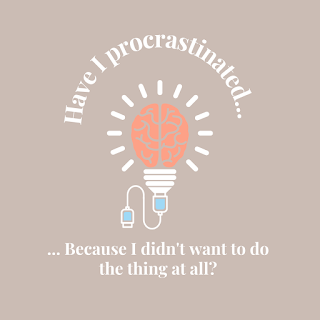 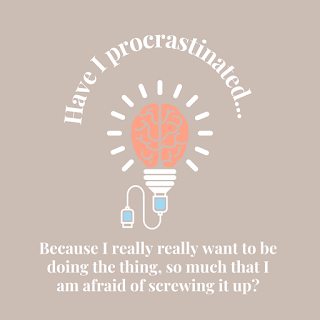 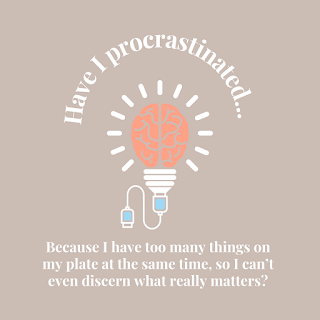 Here are some reasons the author procrastinated throughout their life:

One thing the author encourages you to do is to notice what things you don’t procrastinate. For instance, when she feels inspired to write something, she doesn't procrastinate it. Ever. She finds a way to go write.

Why should we reflect on our procrastinating behaviors?

Reflecting on our procrastination and nurturing this compassion is powerful. A study found that students who were able to forgive themselves ended up procrastinating less in the future. Self-forgiveness is known to help move past challenging behaviours, such as addiction. 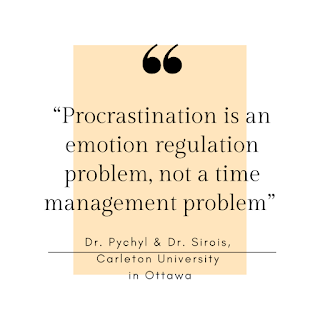 “Procrastination is an emotion regulation problem, not a time management problem,” said Dr. Tim Pychyl, professor of psychology and member of the Procrastination Research Group at Carleton University in Ottawa.

The message is: whenever you can, pay attention to your procrastination. What emotions arise from it Ask your procrastination: are you here because I’m afraid? Because I didn’t want to be doing this thing? Because I am overwhelmed? When you find the closest answer, think about what you can do about it. What would be the most helpful at the moment?"

2 THINGS YOUR PROCRASTINATION COULD BE TRYING TO TELL YOU

article excerpt
"When it comes to finding work that feeds your soul, there are 2 important things your procrastination might be trying to tell you. It could be a sign that you need a change OR it could actually be a big clue that you’re on the right path.
1. You need a change: Procrastination can be a sign that you’re in a situation that just isn’t serving you anymore or that there’s something you need to let go of. Years ago, I found myself procrastinating starting that novel I’d always said I wanted to write, until I realized one day that it was actually an old dream that no longer excited me. I’ve had more than one client come to me wanting help overcoming procrastination at work only to discover that it’s one more sign that they’re in the wrong job. Recognizing that your procrastination is a sign that you need to move on gives you the freedom to come from a more empowering place and be more conscious about the choices that you make. As one client said, instead of feeling like a victim and seeing her job as a trap or as work she “had” to do (and was resisting), she realized that she could make a conscious choice. She could decide if it was worth it to keep this job while she searched for a career that truly fulfilled her. In her case, she found the motivation to get her work done by remembering what she did want—a steady paycheck that gave her the freedom to explore and find a new career path that did light her up. That awareness of what SHE got out of the job gave her the motivation to get her work done, even if she was less than excited about the actual work she was doing there. When you’re avoiding doing something, get honest with yourself about what that might be telling you about your true desires. Then you can bring awareness to whether or not there’s anything about that situation that IS benefiting you—and make a conscious choice to stay in it or move on. 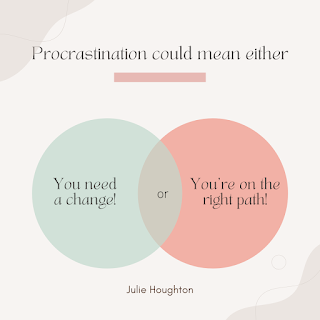 2. You’re on the right path: I know I just told you that procrastination might be a sign that you’re on the wrong path, but it can actually also be a sign that you’re headed in the right direction. That thing you’re avoiding could be the most important thing you need to do next. How can you tell? One big clue is whether you not only feel resistance but also FEAR and at least some glimmer of EXCITEMENT when you think about doing that thing you’re resisting. FEAR mixed with excitement is a big clue that you should do that very thing you want to avoid. Whatever it is that you’re putting off, ask yourself how you would feel if you had actually accomplished it. Proud? Excited? Elated? A sense of freedom or ease? If that idea of completing that thing you’re avoiding makes you feel EXPANSIVE (vs. just relief that it’s over) it could be a sign that it’s the direction you need to head. When I realized I wanted to be a coach and thought about the idea of quitting my secure corporate job and starting a coaching business I was TERRIFIED. But I also felt such a surge of excitement when I envisioned having the coaching career I dreamed of: helping others, being my own boss, and doing work that felt worth it.
What are you resisting in your life right now? If you slow down and get curious, what do you think YOUR procrastination is trying to tell you?
https://www.juliehoughton.com/whatprocrastinationtellsyou/
Julie Houghton
Email Post
Labels: Procrastination