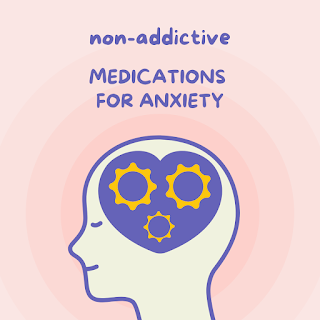 There are several medications that help stop the overactive release of adrenalin that may contribute to several forms of anxiety.  I first learned of this when working at CFL with Dr. Cason.  It's really important to know that there are these options.

Examples of oral beta blockers include: (ending with "lol")


"A sympatholytic (or sympathoplegic) drug is a medication which inhibits the postganglionic functioning of the sympathetic nervous system (SNS).[1] They are indicated for various functions, for example they may be used as antihypertensives. They are also used to treat anxiety, such as Generalized Anxiety Disorder, Panic Disorder and PTSD. wikipedia

Antiadrenergic agents inhibit the signals of epinephrine and norepinephrine. They are primarily adrenergic antagonists, (Alpha Blockers and Beta Blockers) inhibiting adrenergic receptors, but, there are exceptions: clonidine is an adrenergic agonist on the α2 receptor, since this receptor is located presynaptically to inhibit further release of adrenaline and noradrenaline. wikipedia

Other ways of inhibiting adrenergic signaling is by catecholamine synthesis blocking, e.g. by methyltyrosine. Reserpine works by inhibiting transport into synaptic vesicles of noradrenaline by inhibiting the VMAT." wikipedia

"There is clear evidence from many controlled trials in the past 25 years that beta blockers are effective in anxiety disorders, though the mechanism of action is not known.[2] Some people have used beta blockers for 'performance anxiety'. In particular, musicians, public speakers, actors, and professional dancers, have been known to use beta blockers to avoid stage fright and tremor during public performance and especially auditions.

Post traumatic stress disorder (PTSD) is theorized to be the result of neurological patterns caused by adrenaline and fear in the brain. By administering beta blockers which can cross the blood brain barrier immediately following a traumatic event, as well as over the next couple weeks, the formation of PTSD has been reduced in clinical studies.[2] wikipedia

Alpha Blockers can also be used to treat anxiety and panic, such as Generalized Anxiety Disorder, Panic Disorder or PTSD. Alpha2-adrenergic receptor agonists, such as clonidine and guanfacine, act at noradrenergic autoreceptors to inhibit the firing of cells in the locus ceruleus, effectively reducing the release of brain norepinephrine.[3]

Clonidine has shown promise among patients with Anxiety, Panic and PTSD in clinical trials and was used to treat severely and chronically abused and neglected preschool children. It improved disturbed behavior by reducing aggression, impulsivity, emotional outbursts, and oppositionality.[4] Insomnia and nightmares were also reported to be reduced. Kinzie and Leung prescribed the combination of clonidine and imipramine to severely traumatized Cambodian refugees with Anxiety, Panic and PTSD.[5] Global symptoms of PTSD were reduced among sixty-six percent and nightmares among seventy-seven percent. Guanfacine produces less sedation than clonidine and thus may be better tolerated. Guanfacine reduced the trauma-related nightmares.[6] A recently completed randomized double-blind trial among veteran patients with chronic PTSD showed that augmentation with guanfacine was associated with improvement in anxiety and PTSD.[citation needed] Prazosin is an alpha1-receptor antagonist. Raskind and colleagues studied the efficacy of prazosin for PTSD among Vietnam combat veterans in a 20-week double-blind crossover protocol with a two-week drug washout to allow for return to baseline. The CAPS and the Clinical Global Impressions-Change scale (CGI-C) were the primary outcome measures. Patients who were taking prazosin had a robust improvement in overall sleep quality (effect size, 1.6) and recurrent distressing dreams (effect size, 1.9). In each of the PTSD symptom clusters the effect size was medium to large: 0.7 for reexperiencing or intrusion, and 0.6 for avoidance and numbing, and .9 for hyperarousal. The reduction in CGI-C scores (overall PTSD severity and function at endpoint) also reflected a large effect size (1.4).

Prazosin appears to have promise as an effective treatment for PTSD-related sleep disturbance, including trauma-related nightmares, as well as overall Anxiety and PTSD symptoms.[7] wikipedia

"Buspirone and beta blockers are sometimes used adjunctively in treatment of hyperarousal symptoms, though there is little empirical evidence in support of their use. Buspirone is an agonist at the pre-synaptic serotonin 5-HT(1A) receptor and a partial agonist at the post-synaptic serotonin 5-HT(1A) receptor and might reduce anxiety in PTSD without sedation or addiction. There are some case reports but no randomized trials supporting its use. Beta blockers provide post-synaptic blockade of norepinephrine at synapses and blockade of adrenalin (epinephrine) at the organs such as the heart, sweat glands, and muscles. There is interest in using beta blockers to prevent PTSD, though the evidence at the current time does not support this. Beta blockers reduce both central and peripheral manifestations of hyperarousal and may reduce aggression as well. They may be used for comorbid conditions such as performance anxiety in the context of social anxiety disorder."  source
Email Post
Labels: anxiety