12 Tips for Getting Organized for Adults with ADHD 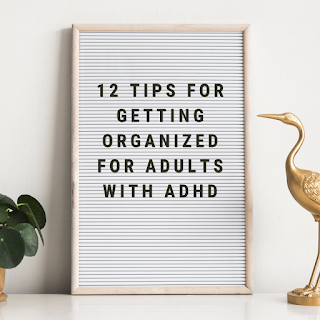 Organizing is a challenge and a chore for most people. But when you have attention deficit hyperactivity disorder (ADHD), symptoms like distractibility, forgetfulness and difficulty concentrating can make getting organized seem impossible.
But there are small steps you can take to organize your space and your life. Below, attention and ADHD coach Laura Rolands and clinical psychologist and ADHD expert Ari Tuckman share their strategies for getting a handle on clutter and creating a clean space.
1. Start small. When it comes to organizing, one of the mistakes people with ADHD make is to try to work on everything at once, said Rolands, who operates LSR Coaching and Consulting.
The second mistake, according to Tuckman, is letting your space become unbearably disorganized. So the disorganization becomes doubly overwhelming, and you give yourself more reasons to avoid it.
“Pick one area to clean for today and make it an area that is not too large,” such as “one section of your kitchen counter or one corner of your living room,” Rolands said.
If this is still overwhelming, think of an amount of time that feels comfortable to you, such as 10 minutes, she said. Set your timer, and organize until you hear the ding. Timers also serve as great reminders that you need to move on to your next project.
2. Work on one small area each day, Rolands said. Again, this helps you avoid getting overwhelmed and easily distracted.
3. Organize on a regular basis. As Tuckman said, “We don’t expect one shower to last all week, so it’s the same with organizing.”
Find yourself slipping? “Remind yourself that although being organized takes some time, it also saves time when you’re able to find things quickly and with less stress,” he said.
4. Shrink your stuff. “The less you have, the easier it is to organize what’s left,” said Tuckman, who’s also the author of More Attention, Less Deficit: Success Strategies for Adults with ADHD.
Some items will be easier to part with than others, he noted, while you might hold onto items just in case you need them later. But he reminded readers that “If you can’t find it when you need it, you may as well not own it.”
5. Downsize regularly. In addition to getting rid of the things you own, be strict about buying more things and letting clutter in your life in general. “The less stuff that comes into your life, the less you need to manage, so get yourself off of mailing lists and resist the temptation to buy those unnecessary little items,” Tuckman suggested.
6. Keep your system as simple as possible. Having an easy organization system “makes it more likely that [you] will stick with it, which is the ultimate goal,” Tuckman said. For example, use file folders with brightly colored labels, Rolands said. Using different colors makes them easier to find, Tuckman said.
Too distracting? “Use one folder for all bills related to the house, rather than creating separate folders for each bill,” he said.
7. Color-code email based on the sender. “This way, you can see emails from your priority customers, family members and bosses first,” Rolands said.
8. Create a simple system for your home and office mail. Mail is something that easily piles up and creates tons of clutter. So organize mail every day. “Give yourself a few options such as File, Toss, Do and Delegate,” she said.
9. Carve out time to clean the clutter. Rolands suggested that readers “Make an appointment with yourself to organize.”
10. Limit distractions, Rolands said. If you don’t want to be organizing in the first place, there are tons of things that can pull for your attention. So turn off the TV and computer, and let your phone go to voicemail. Also, consider other common distractions that stop you from accomplishing your tasks and avoid those.
11. Ask for help. You don’t have to organize alone. For starters, you can ask someone to simply be in the room as you organize. “Having someone else present tends to keep us working longer and [with] fewer distractions,” Tuckman pointed out.
If you’re having particular trouble creating a simple organizing system, ask a friend to help or hire a coach, Rolands said.
12. Check out helpful resources. Rolands likes the National Resource Center on AD/HD for anything ADHD-related and Families with Purpose, “an organization dedicated to helping busy parents create a meaningful family life for themselves and their children.”
Also, ADDitude magazine offers a variety of free downloads on organizing and other ADHD information.
Ultimately, do what works best for you. “There is not a one-size-fits-all [system] with regard to anyone, especially adults with ADHD,” Rolands said. Tuckman added, “Don’t expect yourself to enjoy [organizing], just do it anyway.”
Email Post
Labels: adhd Adult ADHD