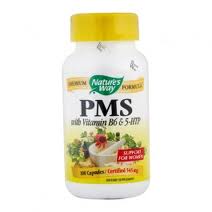 "MOST PREVALENT CAUSES OF PMS

Increased demands on their time, negative changes in their diet and nutrition, increasing stress, and lack of proper exercise, leave women struggling to balance their lives. The harsh reality of the modern-day woman?s life is one of constant physical and emotional wear and tear.

The woman?s carefully synchronized body is out of equilibrium and she is out of touch with her true emotions. Devoured, and often not much appreciated in the balance, many women feel a sense of living on the brink.

PMS in most women is brought on by a combination of diet, stress, vitamin and especially mineral deficiency.

Emphasizing magnesium intake over calcium is a critical factor in preventing PMS. Women experiencing PMS have been found consistently to have low blood magnesium levels.

Magnesium and calcium must be taken together for either one to be effectively absorbed. Research indicates that a ratio of 2 to 1 is best for maximum absorption.

A most important feature of Ultravite is a magnesium to calcium ratio of 2 to 1. Ultravite provides 400 to 600 mg. of magnesium in the recommended daily dose of 4 to 6 caplets.

THE EFFECT ESTROGEN PLAYS IN PMS

Vitamin B6 reduces blood estrogen and increases progesterone. Therefore, B6 deficiency will cause decreased liver metabolism of estrogen, causing an excess of estrogen, this results in ?estrogen dominance.?

Dopamine, produced by the brain, balances out the effects of the biogenic amines by inducing relaxation, increasing mental alertness, and it works to prevent sodium and water retention.

Without sufficient dopamine, the biogenic amines are not held in check, moods are greatly affected in a negative manner, and sodium and water retention increase.

Estrogen also increases the level of the adrenal hormone aldosterone, which prevents the normal excretion of salt from the kidneys, adding to fluid retention. This creates edema-like symptoms of bloating, abdominal swelling, and swollen breasts.

Excess fluid swells the nerve tissue and membranes surrounding the brain. The brain is encased with the skull, and can only expand as far as the skull permits. This leads to torturous migraine headaches are often described as ?vise-like.?

Magnesium deficiency causes a very specific depletion of brain dopamine and B6 plays a synergistic role in mineral utilization across cell membranes, increasing the effectiveness of magnesium.

American women are so deficient in vitamin B6 that it was discovered back in the early 1940?s. The process of refining flour eliminates the B vitamins altogether, B6 is destroyed in cooking and canning, and when foods are packaged. Pregnancy and birth-control pills also cause a B6 deficiency.

To prevent "estrogen dominance" and its negative influence on moods and fluid retention, increased intake of B vitamins and magnesium is absolutely essential.

The minimum recommended daily dosage of Ultravite provides the woman with the necessary blood levels to prevent B6 deficiency. Women with B6 deficiency, which may be as high as 70% of all women...

The brain consumes 20% of the body?s total energy, but under stress the brain demands ever more energy. The brain utilizes glucose as the sole source of energy. Insulin is needed to break down sugar and turn it into glucose.

Women reporting PMS symptoms have consistently been found to have significantly less magnesium in their blood. Without necessary magnesium levels insulin cannot be produced, and without insulin glucose conversion is not possible.

Failing to receive glucose, the brain detects a lack of sugar, and will release signals that trigger the ?sweet tooth.? This sets off cravings for candy, chocolate, pastries, or anything that is sweet and sticky. Many women report being "obsessed" with a desire for chocolate, which is rich in magnesium.

When the brain-under-stress releases signals that trigger the cravings for sweets, few people have the will-power to resist this biological call. Strong cravings result in women eating sugar-laden foods compulsively, or so called "binge eating."

Refined sugar is absorbed into the blood stream faster than any other food and increases the ability of insulin by a factor of 3 to 11 times. This sudden rise in blood sugar levels triggers insulin release far in excess of what is needed. This causes a rapid and precipitous drop in blood sugar levels, the so called ?sugar-crash.?

Coupled with the sudden drop in blood sugar levels, refined sugar also increases the urinary excretion of the body's magnesium, adding to the magnesium deficiency, exacerbating the problem. This causes the brain to once again signal for more sugar, thus setting in motion a self-perpetuating cycle.

Sudden increased sugar intake triggers hypoglycemia which results in palpitation and fainting. Rapid drops in blood sugar levels cause headaches and fatigue. These alternating symptoms lead women to feel "out of control." Researchers have termed this up-and-down sensation the "roller-coaster effect."

During this period of increased sugar intake weight gains of 5 to 15 pounds is common, weight which is difficult for any woman to lose during the symptom free period of her cycle. Binge eating and subsequent weight gain is not a matter of self-control. It?s PMS.

Long term weight reduction and control is much more likely to be effected by the management of PMS then dieting.

Increasing magnesium intake by a minimum of 300 to 400 mg. daily is the only way to break the negative self-perpetuating cycle that causes the ?sweet tooth? and leads to weight gain.

Magnesium deficiency is also the primary cause of dysmenorrhea, or cramps, which usually start a day or two prior to or at the beginning of menstruation.

B vitamins, known as the "energy vitamins," have attributes which set them apart from all other vitamins. B vitamins are synergistic, to achieve optimum efficiency all the B vitamins must be taken in a particular ratio.

The B vitamins work as a team in producing energy, in the function of the central nervous system, metabolism of carbohydrates and proteins, stimulation of the immune response system and are essential to the formation of RNA and DNA.

B1 (thiamine) is an important neurotransmitter and is necessary to the health of the nervous system. Confusion is a symptom of B1 deficiency.

B2 (riboflavin) prevents acne, is instrumental in cell respiration, maintaining good vision, health hair, skin, nails, and is necessary for normal cell growth. Many authorities claim that B2 deficiency is the most common nutrient deficiency in America.

B3 (niacin) is involved in more than 50 different metabolic reactions. Niacin helps with hypoglycemia, treating anxiety and depression, and through stimulation of blood flow in the capillaries helps in relieving migraine-type headaches. People who eat too much sugar or refined processed foods require more niacin.

B5 (pantothenic acid) is present in all living cells and is very important to metabolism. It supports the adrenal glad to increase production of cortisone and other adrenal hormones to help counter-act stress and enhance metabolism.

B12 (cobalamin) is often referred to as the ?energy? vitamin. B12 makes up for the anemia, weakness and fatigue brought on by menstrual problems. B12 deficiency is especially wide spread due to the fact that it is depleted by the use of birth control pills, antibiotics and tetracyclines.

Inositol has a primary function in cell membrane structure and integrity. Acting with choline it helps in brain cell nutrition and emulsifies and distributes body fat.

Para-aminobenzoic Acid (PABA) supports acid production and deficiency of PABA is the most likely cause of graying hair.

Biotin helps to reduce blood sugar. Is needed for the synthesis of fatty acids and is necessary in the formation of DNA and RNA.

Vitamin E is very helpful to women. It provides relief from hot flashes, cramps, and menstrual pain. It has a primary function as an antioxidant, protecting cell membranes, active enzyme sites and DNA. The American diet has lost many of its natural sources of vitamin E, and estrogen depletes vitamin E, increasing the body?s demand for it. Supplementation of vitamin E is absolutely necessary to prevent PMS symptoms.

Vitamin A is necessary for the body to ward off environmental pollutants, and seems to prevent the development of breast and cervical cancer. Vitamin A is reduced with illness, during times of stress, if we smoke, or if we are pregnant or nursing. For vitamin A?s antioxidant properties to work, intake must be at least 5,000 units a day or greater.

Vitamin D is necessary for calcium and magnesium to be absorbed. Vitamin D is absorbed through the skin by sunlight. Women spending time indoors, in an office, factory, or inside a vehicle, often do not have adequate supplies of vitamin D.


VITAL IMPORTANCE OF OTHER MINERALS

Zinc is involved in more body functions than any other mineral. Zinc affects menstrual irregularity and female sexual organs. Without zinc the carbon dioxide exchange could not occur at a rate fast enough to keep humans alive. Zinc levels are low in women with PMS and there is a high correlation between zinc deficiency and depressive moods in women.

Potassium maintains the body?s water balance in conjunction with sodium. More potassium to sodium, at a ratio of 2 to 1, is necessary for proper fluid retention. Potassium is now deficient in our diets while sodium (salt) intake has soared. Natural potassium/sodium ratios in American women have been out of balance for many years, causing fluid retention and its many unwanted symptoms.

Chromium is intimately involved in blood-glucose regulation. It is useful for women who experience food cravings, typically for chocolate and certain carbohydrates, such as pizza. America has the highest rate of chromium deficiency in the world.

Iron is essential to all menstruating women. About 30-40 mg. of iron will be lost during an average female menstrual cycle. Even a slight iron deficiency can result in fatigue and lethargy.

Iodine is necessary for the proper functioning of the thyroid. Without adequate thyroid activity women will suffer excessive fatigue, excess weight, and constipation.

Dr. Linus Pauling, winner of two Nobel prizes, states, ?You can trace every sickness, every disease, and every ailment to a mineral deficiency.?

The pH of the small intestinal fluid is in the range of 7.0 to 7.2. At this pH inorganic minerals form insoluble (not dissolved) hydroxides, a gelatinous magma type of precipitation, which makes the minerals non-absorbale.

There is no known scientific test to determine the exact percentage of minerals absorbed by the human body, however, scientists are in agreement that biovailability of inorganic minerals may be below 20% and it is not above 30%.

Supplement manufacturers increase the dosage of inorganic minerals hoping to off-set this process and increase the mineral percentage uptake. However, the increase in inorganic mineral content only leads to an increase of gelatinous magma, which lines the mucous membrane of the small intestine. This blocks absorption of all minerals and vitamins and causes gastrointestinal distress such as diarrhea and constipation.

Increasing the dosage of inorganic minerals will not lead to a significant increase in mineral uptake. It will greatly increase the G.I. tract side effects and instability of vitamins."
Email Post
Labels: PMS vitamins